To be chosen as Connecticut’s Motorcoach Driver of the Year, a driver must demonstrate safe driving with the highest standards in every facet of the profession. “To even be nominated for such an award, our drivers must also possess extraordinary performance standards, including unparalleled driving skills and personal conduct,” explained Colin Johnson, Vice President of DATTCO’s Coach & Tour Group. “John has achieved all of these laudable attributes during his time with DATTCO.”

Mr. Davis’ career as a motorcoach operator spans more than three decades and over 3 million miles driven. For the past 21 years he has worked as the official driver for the Hartford Wolfpack, the American Hockey League’s team based in Hartford. He has driven every single one of their trips, every year since 1997.

John is one of the most requested drivers by DATTCO’s clientele. His values are customer driven, and he works tirelessly to provide exceptional value to every customer. John has been named DATTCO’s Driver of the Year twice. Recipients of this award are chosen based on their excellent history of being a safe driver, having excellent customer service skills and professionalism and courtesy exhibited while working with our team and clients.

John is a committed advocate to the industry as a driver mentor.  As new drivers begin work with DATTCO, they receive a warm welcome and a helping hand from John.  For more than ten years John has been mentoring our drivers, using his vast experience to help them adjust to, and navigate their way through, all the different aspects of the job.

“We are fortunate that John is willing to share his knowledge of the motorcoach profession, and his experience on the road with our less experienced drivers,” remarked Don DeVivo, President of DATTCO, who has worked with John his entire career at the company. “John represents DATTCO at the highest of industry standards, and always puts the interests of the company first. I am proud to have him as part of our team.” 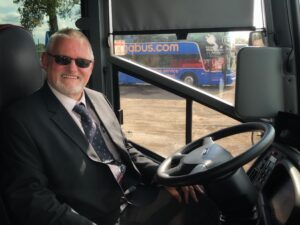